The Darrel made peach/berry pie for breakfast.  I can't decide if I should hoard it, eat it or freeze it.  Of course he used MY recipe, so why wouldn't it be good?

Yesterday afternoon I was asked to tour the new unfinished courthouse building to see where the art is going to hang when it's finished soon.  Several of us who work with the Bowen Center art people walked all through the construction project wearing very glamorous hard hats, jeans and tennis shoes.  It's an extremely impressive building with a huge rotunda and four court rooms in the middle of Dawsonville, population 500.  I guess the government had some money we sent them to spend.

Anyway, we were told to submit as many pictures for this venture as we wanted.  Since the walls are so large, I've about decided to submit two more in addition to the "Trahlyta's Path" one I posted in this blog a few days ago.  The only rule is the pictures are supposed to depict north Georgia.  Not knowing if Day Lilies are native to Georgia or not, I'm going to submit my "Day Lilies Picture and the mate to the first one I posted, this one named "Beside Still Water." 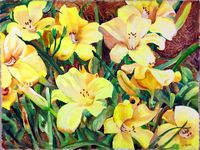 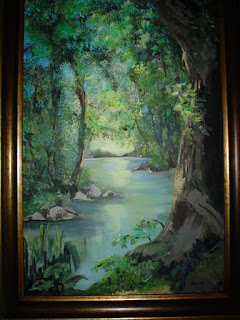 I'm a little jaded about such things because of my experiences in the past, so it remains to be seen if all of this idea will come to pass or not.
I've been communicating with an internet friend in India, who is an artist and writer.  His name is Ravi and he does some incredible paintings as well as writing books.  I had the privilege of reading his story, "Lover's Rock," when I was working on line on my book at Critique Circle.  This is a site where writers critique each others' work in order to eliminate as many errors in the stories as possible before submitting them to publishers and/or agents.  Anyway, Ravi and I have been discussing publishing in general and he says India has the same problems America has regarding publishing.  I find it interesting that counties so far apart in all ways would have this in common.  Remember, too, Ravi wrote his story in English, not his native language.  I cannot see myself attempting to write anything in his language.  In fact, I neglected to ask him exactly what language that is.
Tara misses her mom.  But she's taken up an interesting relationship with the Darrel.  My husband is Tara's hero--he manages the magic closet where snacks and other foods materialize.  He knows the code to get the job done on trips out the back door.  She resists the temptation to take off to parts unknown with him at the helm of the leash, and with her own head doesn't challenge him very much.  She laughs at me when I call her back from wanderlust times.  She scorns my ability to produce the proper tidbit reward for her prideful deposits on the lawn.  But I'm the sleep buddy--at least so far.

Best described as twenty pounds of fluffy fur with eight legs sticking up, it's a good way to wake up.  Everybody groggy, walking around with people coffee, which merges into the morning roadrace, the Darrel doing the announcing of who's in the lead as they enter the first table leg curve, who passes on the stretch, and critical jockeying for  position on the inevitable shoulder slide.  Maybe we need more carpet in here?

I've overrun my mouth (fingers) already this morning, so will report on the Yogurt shop book signing happening later today or tomorrow.

Meanwhile I'll leave you a note from my favorite book, "Life's Little Instruction Book."
#171:  Never give up on what you really want to do.  The person with big dreams is more powerful than one with all the facts.

Melody
Posted by Melody Scott at 5:47 AM