I went over to the Bowen Center to paint today.  I'm working on an experimental abstract which doesn't impress me yet.
Anyway, Marcia--the amazing woman who runs the center, asked me to paint one of the Scotty Dogs in an artistic fashion for an outside sign designating the Bowen Center.  They've been needing something that indicates art goes on inside the old 12-grade original Dawson County school house.  So several people will be doing the Scotty dogs which are about two feet by three feet in size, made out of solid steel and in that form to represent the general map appearance of Dawson County.  I'm flattered to be asked to do this.  Now all I have to do is not screw it up.

The new courthouse has been under construction for most of a year now, and is very impressive looking for a city with only 500  people in it.  I think the county now has a 50,000 person population.  The courthouse decorator has asked the Dawson County Arts Council to supply the art for the new building.  Pictures for this venture are to be related to north Georgia environs, so I'm going to enter one called "Trahlyta's Path" which is taken from the fable of Trahlyta, a Cherokee Indian who fell in love with a warrior and lived near Blood Mountain, home of a bloody Indian battle. 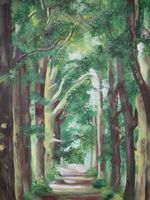 If it's accepted it'll be there for, as I understand it, a year.

Yesterday I added the original prologue for Auraria Dead to my blog.  Now I'm deciding whether to add the first chapter of Auraria Dead to it tomorrow.  The other option is to put in a short story.  Another decision to make.....

Tara Anne, a Cavalier King Charles Spaniel who belongs to a friend of mine, Arlene Ingram, is coming to stay with me and my Cavalier, Abby, for a week beginning tomorrow.  Here's a picture of both of the dogs: 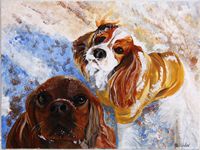 Melody
Posted by Melody Scott at 11:38 AM