I never think about cemeteries as patriotic places...even military cemeteries.  It's so tragic that so many people have died in wars.  But sometimes I come across a memorial of a life that goes far beyond that one dimensional stone and makes me think.  Even knowing what they were doing, they literally gave their lives to their country.
This first stone is Patrick Dooley's.  They didn't know when he was born, but he died in 1910.  He retired from the army, so spent most of his life in service. He came from Ireland and was probably just a kid during the Civil War.  In fact, my husband the history buff says the Irish were drafted in to fight in that war because they were starving to death. 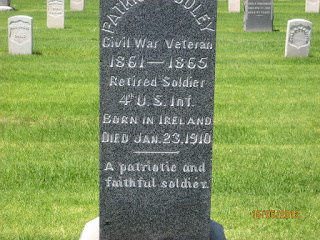 The second stone is a memorial for Albert Hunter, (and his wife) who marched 2000 miles from to in 1846-47 with his Battalion to fight in the war with .  I noted they both died in 1847 and of course don't know how they died.  It probably had something to do with the war.  I can't get my mind around walking 2000 miles in 1846 when the roads were questionable.  I suspect they had some transportation, but it was still a daunting task. 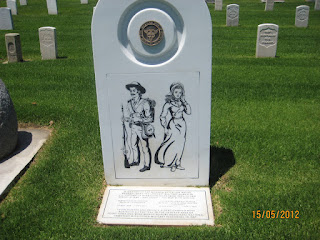 The next stone is a memorial for sixteen men who were killed in one battle of the war with .  These people were all moved to in 1848,
after the cemetery was established. 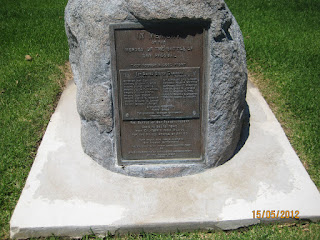 When the cemetery doesn't have actual bodies because they were lost, as happens when ships are sunk, sections of the cemetery are laid out with headstones. Those stones are placed closer together than would have actually been possible with caskets, so they look sort of miniaturized and have a low fence around them. To see all the stones with the same date of deaths on them is emotional.  The wall behind the big monument is a columbarium--a wall of cremated burials--sort of like a mausoleum.  I call them "spirit mailboxes."  You can see San Diego Harbor off in the distance, with the city of San Diego on the other side of the harbor. 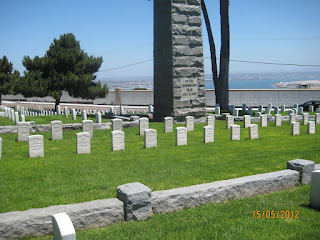