Today we drove forty miles southwest to La Jolla (Spanish for "The Jewel," and pronounced "La Hoya") which is a very exclusive (read expensive) area on the coastline of San Diego.  Because the land jumps right up from the Pacific Ocean to about 800 feet in this area, when you get up on the hills, the views of the coastline on the west and of San Diego Harbor way southeast are spectacular.  It's a 360 degree view that usually only hawks and airplanes have.  Our goal was the top of Mt. Soledad (Spanish for "solitude") 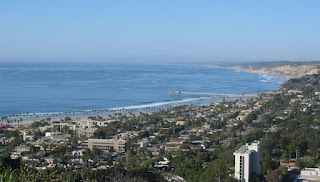 This is a little hill of no special historical significance but contention.  In 1913 the people of LaJolla built a 22-ft. tall wooden cross on Mt. Soledad's crest.  Since that one fell down and the next one was burned by the KKK and the third one blew down, they finally erected a concrete and steel version and surrounded it with a sturdy iron fence.  Along the line it was owned by our government and made into a military monument with marble stone walls depicting military personnel over the years from WWI.  Today, individuals may purchase a marble stone with a military person's picture, statistics and service dates for the round sum of $1800.00.  This stone will be added to the walls as best it fits.  The individual doesn't even have to be deceased!   Meanwhile, the 2% of the population who are hate groups have consistently campaigned to have the cross removed which has cluttered up the legal system for about fifty years.  Maybe God has had something to say about that, since the cross still stands, go figure.  It's a lovely, peaceful memorial spot, now attached to a tiny park where a person can go to see the best of the coastline in Southern California, and admire the engraved faces of all those good looking people who have defended our country over the years.

Those American faces we've been privileged to have represent our country have a permanent privileged view of an American wonder.