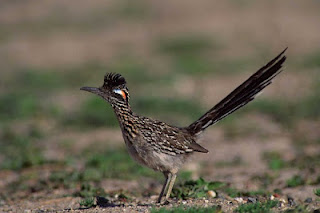 Today I returned from after a seven day trip in time to have a little adventure.


Abby ran outside on one of her many walkabout trips to the great outdoors to find a quail squatting beside a pickleweed plant.  The quail looked at her and she looked back.  They didn't have much to say to each other, grew bored and parted.  In the Garden of Eden there is little fear if you aren't a rabbit.  Day predators are hawks, night ones are coyotes and owls.


While I was gone the Darrel entered the kingdom of the wildlife.  Two nights ago just at dark he heard a whole pack of coyotes screaming and fighting right outside the door.  They scream so loudly they sound like they're killing each other.   He was concerned about our landlady in the neighboring house, who tends to have no fear since she survived the London Blitz during World War II.  She might easily step into the middle of wild coyotes to save a rabbit from their jaws.  He opened the sliding glass door clapped his hands and yelled to run them off, though he couldn't see them in the dark.  It was too late for the rabbit victim.


Next morning, a two-foot tall roadrunner, came screaming through the patio where Darrel was standing waiting for the Abby to finish her walkabout.  It stopped, looked at him, went "beep beep," and took off in a cloud of dust.  He said he now understands why it can outrun Wile E Coyote.  He hadn't known roadrunners were so big or fast.  I suppose they'd have to be since their main prey is rattlesnakes.  They also like lizards, which is probably what it was after when Darrel found him.  This place is lizard heaven. 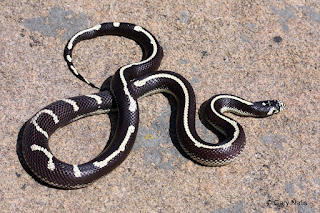 That day after work, Darrel came home, went in the house and remembered he'd left something in the car so stepped back outside to find a snake about to slither through the rock wall across the four foot porch.  The critter stopped to look at him.  It was solid black with bright yellow pinstripes.  It made a show of rattling a tail with no rattlers on it. Darrel thought it was too pretty to kill and it told him it wasn't poisonous.  When he looked it up on the internet he found it was a California King Snake.   Those guys kill rattlers, so we're glad to have him around.
Posted by Melody Scott at 4:16 PM