This is the wall across the front courtyard of Muriel's house, which was made by her husband, Clay Walker, who is a well-known artist and sculptor.  Since his ancestry was American Native Indian, he made this wall as a triibute to his heritage.  Clay is now deceased but his paintings are in a gallery in San Diego.

Muriel asked me to paint an electrical box that sticks out in the yard across from this sculpture. This box is 20" x 30" and is on a stand six feet high, making a really ugly yard ornament. It's painted green but isn't disguised at all. So in keeping with the Indian theme, I've decided to use Kokopelli on that box.  I'm sure many people have seen this character, but here is Kokopelli:

He is actually from the Hopi Indian tribe and has been found on earliest petroglyphs on cave rocks.
He is the legendary piper who calls spring in from winter and causes all kind of havoc with his pranks.  He is responsible for spring's rebirth in all is ramifications.

So this box I plan to paint will have a colorful background and Kokopelli will have to be white to blend in with the power meter face and be Koko's head.  Obviously I won't need features on this face. I hope for it to be a faux art mural of sorts.  And if it looks terrible, I can always paint it back to green.
Posted by Melody Scott at 7:24 AM 1 comment:

While at Riverside National Cemetery in our home town of Riverside, California today to put flowers on my father's grave for Father's Day, we saw signs for the Medal of Honor Memorial and followed them.  Every recipient from every war fought since the civil war is engraved on the wall of that memorial.  Again, it was awesome. 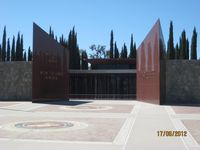 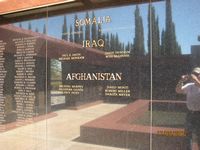 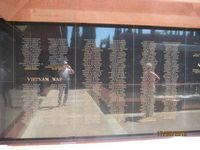 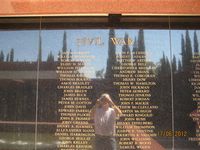 Maria stepped into her kitchen from the carport door.  A fragrance she didn’t recognize floated around the room.  It was nice but a little strong.  Hmmm.  Who did that remind her of?  “Emily!”


“Don’t take your love to town,” almost a whisper, came softly from around the corner to the bedroom.


Now what?  Not sure she wanted to know, she followed the direction of the voice into her bedroom.  She practically ran into a huge birdcage with a large gray bird staring its bright beady eyes at her.  It said, “Oh my love, you are beautiful. Awk,” in a soft little voice.  She stepped back in surprise and heard something clatter in the bathroom.  A makeup tube came rolling through the doorway.  She stooped to pick it up.


“There’s nothing wrong with my cosmetics,” Maria said, then blinked her eyes at her cousin’s outfit.  Emily was dressed in shimmering lavender.  She looked like a glitzy snake.  From neck to shoes she was covered in super thin spandex, her spectacular body, twenty three-inch-waist, thirty-eight-inch-chest, and thirty-four-inch-hips seemingly sheathed in a slick purple balloon.  “You look like an ice cream soda.  Why is a bird in my bedroom?”


“He’s not just a bird, sweetpea, he’s an African Grey Parrot—tres valuable.  Emily dusted her cheeks with a fat makeup brush.  “He needs to be in a bedroom so he doesn’t get upset.”  She smiled at her reflection, stood up from the little dressing table stool and tossed her black waterfall of hair over her shoulder.


Fascinated, Maria asked dumbly, “Why would he get upset being in a living room?  Where did you get him anyway?"


“He’s very sensitive, ma cherie.  I’m off to work now.”  She tucked away the makeup tubes and vials, turned off the bathroom light, and sidled past Maria toward the birdcage.  The bird cocked its soft gray head and said quietly, “don’t touch me,” and blinked its eyes.

Emily's giggle hadn't changed since she was four years old.  “Don’t worry about me, I’ll be back late, but I can find my way in." Emily grabbed Maria’s shoulders and kissed her cheek.  “Au revoir.”  She picked up a waiting bag and went out the carport door.


Maria sat stunned on the corner of the bed and watched the bird.   "What a peach!" Epifanio blurted.  He made her smile in spite of how she felt. Betty Albee was not even thirty five yet.  Maria wondered again if that hole out in the woods could be involved in Betty’s death.  In a cemetery that could hold any type of dead things, truth be told.  Probably only a coincidence, but what a great place to hide a body.  Maria’s father said there was no such thing as a coincidence.


Maria was greeted with a conversational, “You’ve been keeping this from me,” when she walked into her bedroom.  She turned to see the parrot hunched on his perch.

Wisk together the first three ingredients

Melt butter in the bottom of an oblong baking dish

Pour the fruit into the dish

Pour the wisk'd ingredients over the fruit

Bake at 350 degrees for one hour

Sprinkle sugar over top when you remove cobbler from oven

Posted by Melody Scott at 6:25 AM No comments:


Put a little olive oil in an oblong baking dish.


Brush a tortilla with olive oil on both sides, then put some chicken, each cheese, olives, green onions, mushrooms, peppers/chilis on it.  Pour some of the liquid in each enchalada.


Roll the tortilla up then slide to end.  Repeat with the rest of the tortillas.  Remember there are only about eight, so be generous with filling.  Save some cheese and some sauce to pour over top of cassarole dish.


Lay some aluminum foil over the dish without sealing so the top doesn't brown too fast.


Bake at 45-55 minutes at 350 degrees.  Remove aluminum foil about twenty minutes early so the top can bubble.

This is a hard recipe to ruin.  You can add or delete any of the above, use a large dish, use more tortillas, etc.,  and they'll still come out fine if there is enough liquid so they don't dry out.
Posted by Melody Scott at 8:21 AM 4 comments:

GRATE HALF THE CHEESE INTO AN OBLONG PAN


CHILIS AND RINSE OUT SEEDS IN COLD WATER


PUT CHILIS ON TOP OF CHEESE


WHIP AND CONDENSED MILK 'TILL FROTHY


ADD A LLE SALT AND PEPPER


POUR MIXTURE OVER CHILIS AND CHEESE