The Game Of Thrones--the first book in series (of 5?) had to be an awesome project for the author.  The story evolves beautifully from the viewpoint of ten families (kingdoms).


It hit me as probably just about exactly how the history of progressed.  The author made up his own country and in my copy created a map, without which I don’t think I could have followed the story.  It was daunting enough having nearly 50 people to keep up with.  Told from the viewpoints of so many individuals including their titles and their geneaology(s) the plot twists in and out of vision.  For instance, each character has a first name, a last name, a title and a reference to their relationship to each other individual (son, cousin, father, bastard of, brother, sister, aunt, uncle, etc.) which are all used interchangeably in the text, magnifying the confusion.  Exactly no names were pronounceable.  Being proper nouns, even the dictionary didn’t help with that.  I did not follow it well, but was able at least to find the plot and realize it was more about the separate families than each person.  After I got through that obstacle, the story was full of deception and intrigue.


On a personal basis, 17 pages of eyeballs being gouged out, horse entrails falling on warriors trapped under their thrashing bodies, routine beheadings, outright evil mean acts and war strategy isn’t my thing. This was juxtaposed to human feelings of concern, heartbreak, worry, love, loyalty.  Odd.   I found it kind of interesting when the rare instances of fantasy popped in for a visit to the plot.  In fact, I spent way too much time trying to figure out what the character had actually seen from his/her venue.

As I mentioned in an earlier facebook post, the author spent a huge amount of time researching words and found the most obscure usages for ordinary terms, then stuck with them religiously.  Unless you are a Rhodes Scholar, I doubt anybody will be reading this story without some kind of word reference source handy.


Interestingly, since I was using an Iphone as my dictionary, most of the words I looked up came from wikipedia’s reference to the movie version of the very book I was reading. Go figure.  The visuals painted by the author do what a book is supposed to do and sets you into the story nearly as a participant.  I don’t think I would sit through the movie knowing as I do that would make the dreadful pictorials even more absurdly graphic.  I’m quite sure the history is realistic in all its human acts of inhumanity¸  however.  I’m not sure yet if I’ll go on to the next volume.
Posted by Melody Scott at 8:20 AM 2 comments:

Well, hello there!  I knew you were in there somewhere.
Now is where I get excited. His soul came out with his eyes.  The rest is auxiliary.
I've blobbed in some pure black to see how much contrast I can get from the dark colors, and have lightened some of the background under his neck for the same reason. 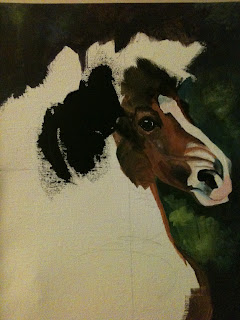 This is sort of the paint by numbers stage.  Color gets put on but blending isn't too good yet.
I'm concentrating on shade and light contrast.  When there are several shades of the same color sometimes this gets tricky.  Some of the browns are blue/brown, some are yellow/brown, some are red/brown.

Poor little horse is kinda funny looking without his eye. 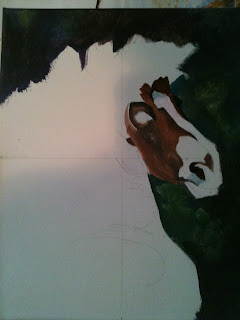 Posted by Melody Scott at 1:17 PM No comments:

I've added some background, kind of outlining the subject.  Since I'm using acrylics, I can come back later and lighten the background up if it needs it.  Right now I'm mostly concerned about the dark/light contrast thing I want to develop later on.

The background isn't really black.  It's a combination of red and blue with some browns and yellows thrown in to look like a blurry forest, like a camera lens shows. 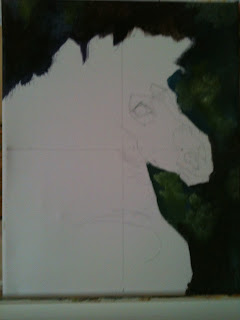 Posted by Melody Scott at 6:31 AM No comments:

Here is the picture I plan to paint, with a sketch of the same thing.  Notice the grid lines running horizontally and vertically across both the picture and the sketch.  These lines help me keep my perspective--whatever is in one square of the picture should end up in the same square of the drawing. 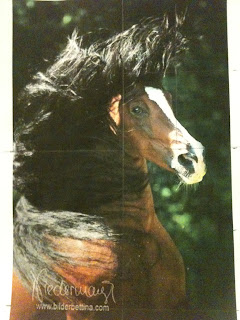 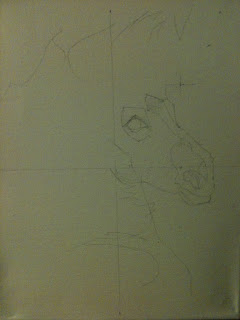 The extra lines on the drawing indicate where I'll have a drastic color change for the horse's blaze, his nose, his lips (contrast).  So when I get into the flurry of painting I won't forget where those lines should be.

Posted by Melody Scott at 7:03 AM No comments:


“Tell me everything that happened from the minute you got to the barn,” the Forsyth County Deputy said to Maria.  They stood beside Maria’s Jeep as deputies swarmed the barn.  An ambulance cruised up and stopped next to them. Two Emergency Medical Technicians hurried out of it to the barn.   A woman in uniform had taken Donna Kelly outside the back barn door to question her.
“Something looked wrong from the minute I pulled up.”  Her knees wanted to buckle.  She told him the whole story.
“Why did you move the horse?”


“We didn’t want to get stomped and we had to check on the man in the stall.”  This guy was getting annoying.


“I know.  We had to find out if he was alive, though. Ms. Kelly felt for a heart beat but didn’t find one.”


“He’s been dead for a while.  Plenty of time for the horse to keep kicking him around.”


Glad she hadn’t eaten breakfast as nausea swelled in her, she said, “A horse isn’t likely to do that, you know.  After his frightful reaction to whatever happened in here, he’d ignore the guy.  Horses aren’t spiteful.”


“Really?”  The deputy wrote furiously in his notebook.  Underlined something with his pen.  “I didn’t know that.”


“Really.  In fact, a horse won’t even step on a person if there is any way they can avoid it.  Something must have happened to scare him so badly he’d do this.”


“So you don’t think he’s a rogue horse, like a dog that goes wild and turns killer?”


“I guess it could happen but I’ve never heard of it.  Some horses are afraid of everything and constantly strike out because of it so they’re just mean. I think this horse was probably mistreated.  So maybe.”


“Can you identify the body as Dixon Wraithmire?  The man you came to see?”


“I don’t know.  I’ve only spoken to him on the phone, driven by the farm.  It’s listed with an broker.”  She handed him her business card with the name and phone number of the listing broker written on the back.  “He doesn’t really look like a human right now either.”


“The lab will have to identify him.”


She thought about what would happen to the horses now, if the dead man did turn out to be Wraithmire.  They’d been trained to show, bred to show.  Championship stock was a big money game.  ’s family would inherit the barn.  It didn’t


add up that the people with money lacked so much sense.  When she got enough money ahead, she’d change all that and make the most of what she could create with it.


She tried to put the image of the dead man out of her mind.  One phone conversation didn’t qualify as a relationship.  But she didn’t even get a chance to see what he looked like.  And now his face was pulverized in death.  She pulled over to the side of the road, stepped out of the Jeep and took several deep breaths of cold air.


Reinventing herself turned out to be not as hard as she’d first thought.  She’d left fifteen years ago with nothing but her clothes, leaving behind her abusive husband, her Western lifestyle.  There hadn’t been much except for the potential part that she’d given a lot of stock.  A lot of wasted years.


was a new start and she’d been a chameleon changing from dirt to green.  Ironically all the pasture she’d coveted in Arizona when she’d had a horse lay everywhere in .  But there was no longer a horse in the picture.  She hadn’t known where she’d live or work so she’d  sold her Appaloosa colt to a friend as a trail horse.  The white blanket on his backside was the last she’d seen of him in the horse trailer turning out of the gate. Tears still warmed her eyes every time she thought of that colt.


But she was still alive.  More than she would have been if her ex had killed her.


She found a roll of Tums in the bottom of her purse and chewed one as she climbed back into the Cherokee.  Maybe she should change her image again.  Dead people made her sick.


The dead man in the barn had to be Dixon Wraithmire unless he had a helper for his operation.  Every breeder had help.  The job of a farm and animals was too much for one person.  Especially one with an outside job.  She would have loved to have a farm, but that would take a bunch of money she didn’t have yet.  And now she had a life she didn’t want to jeopardize.  Real estate excited her--finding the right land for the right person gave her the warm fuzzies, as here grandma used to say.


Probably Donna Kelly wouldn’t want to discuss purchasing this farm now, even if she did need its acreage for her Arabians.  On the other hand, maybe the price would go down with the stigma.  In this market the price was already low.  Three hundred acres carried an excellent commission, regardless.  She’d have to make it work.
Posted by Melody Scott at 3:47 AM No comments: