I've had to put the French Street scene on hold because I'm attempting to make a cover for my new book out this September, Chattahoochee Dead.  So this is a rudimentary start and remember that there will be writing all over it as well as the picture as background.  It's pretty grim right now, as it's just starting to be color blocked in and there is a long way to go on it.  And yes, the parrot will not be entirely in the frame, but just peeking in the side.  The parrot's book name is Epifanio Alejandro, and is an integral part of Chattahoochee Dead (which is why he'll probably be on the book cover.)
The real bird's name is Amanda.  I'll put a picture of her in here as well.  Check back as I will be working on this painting until I either like it or can it. 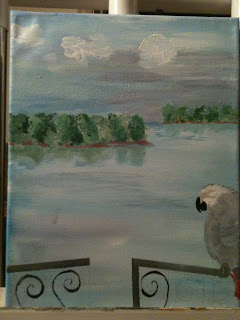 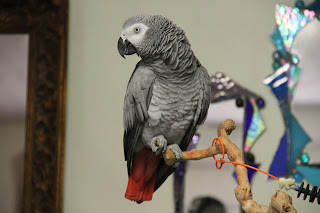