My blog for 5/7/2013 Chattahoochee Dead Photographs. 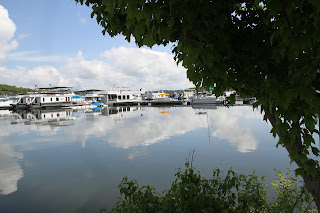 This is the marina where Mason Walker keeps his houseboat on .  He bought the boat after he left where his wife, Tracy, had died of cancer.  He promised her he'd make a new start after she was gone, and that when he left town he would follow their dream of living on water one day.  He had already checked out the costs involved with San Diego Marina charges and Florida Marina charges and decided his best move would be to give up on oceans and investigate lakes. Lake Sidney Lanier has the largest inland houseboat marina in the , so he made his way to  moved to  where he started a private investigator service and shopped for a houseboat.

At last he found one that was in terrible condition but thought he could restore it to enough splendor to keep himself happy and comfortable.

This is the boat's porch where Maria and Mason got to know each other better, if you know what I mean. 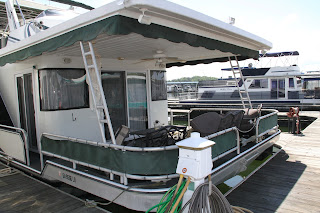 But when she was in trouble with some very bad people who had persecuted her father’s family, Mason knew more than anybody else about the reason.  He also used gadgets that Maria could not find anywhere else.  It made her edgy having somebody know every minute of her day, but she was grateful when her cousin got her in trouble with the Atlanta Mafia and Mason showed up like a white knight to save her from enslavement or death.

The thing that drove Maria crazy was he popped in and out of her life without warning or explanation after being gone for sometimes six months.  She knew he was high on the list of agents, but not an agent.  He was well known by the FBI, but not on their employee roles either.  If he hadn’t been so downright gorgeous, sexy, tall, lean and Irish, she would have dumped him for neglect.  But every time she saw him he treated her like a queen, promised her nothing good or bad and lived his own life, pulling her into it a little bit at a time. Not to mention he made her knees weak.

Chattahoochee Dead will be out in November 2013 and maybe you can figure out just what it is that Mason does.
Posted by Melody Scott at 11:22 AM