Our Leprechaun landlady stopped yesterday to give us a bottle of wine from the guy whose wine vinyards are next door (San Marcos Winery).  I had mentioned to her I wanted to see if we could buy a bottle from him before we leave town.   I knew his workers had been pulling nets over the grapes, but apparently they were too little too late.  The sun had already damaged the fruit, not to mention an attack of wasps that ruined the crop.  Though it was an award winning crop last year, this year it's a total flop.  Can you even imagine being a grower?  In this man's case, I think financially he's okay, but the disappointment must be devastating.  I've seen him out in the vines tweaking equipment the whole time we've been here.  He even has roses planted at the road end of the vine rows, and plaques with the names of the type of grapes in those rows.  He obviously loves what he does.  It's a good thing...this year it's all he's going to get. 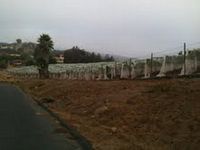 I took a picture of the vines in their nets this morning.  Kinda sad looking.

I'm living for November to see if anything good is ever going to happen with our economy.