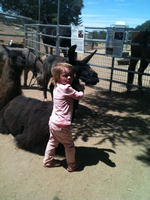 Or you could show how you REALLY felt by acting it out.  Five acting troupes made haste toward the costume tent, 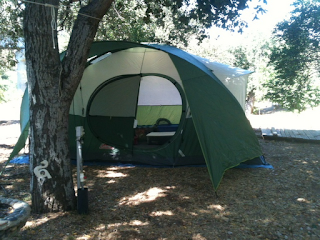 wrote their scripts and presented each to the cousin gallery one night.  The campfire wranglers lay out their bedrolls and snoozed around their fire until invaded by a tiny commodity scooching in beside her brother.  I don't recall the titles of all of the skits, but three-year old Kaitlin showed up for acts one, two, three, and four.  She rolled right in next to her brother in the campfire skit, waved her arms with the big girls in skit three, her appointed role—even had a speaking line.  She blazed through skit two, gawking at the wild boys, and simply stared at the old people's "Jack McCall's at the Sisters' Saloon" or some such name.
Cousin Kaitlin was very popular that night, and insinuated herself into all of the skits, with great aplomb.  After all, she was dressed the role of prairie child, so why not flaunt it?  Get some use of all that prairie costume and makeup.


When she wasn't being the Prima Donna, she took time to hug a llama.