As some people may know,  my husband got a temporary job in California, where he will be for six months.  Because he will need his truck for this job, he's driving out there with Abby the Cavalier and our little camping trailer to sleep in on the way. 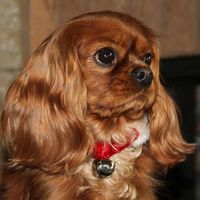 Now, I know everybody says this about their dogs, but Abby IS the best dog in the world.  She thinks like a very well behaved child and rarely turns into a dog.  On this trip west, Abby slept in a little kennel, as she is kennel trained.  One morning she wouldn't come out of the kennel, which has never happened in her lifetime of four people years.  Darrel got down to see what was wrong, but nothing was wrong.  Worried, he tipped the kennel so she had to come out.  She sat and stared at him as he got her food out to put in her bowl for breakfast.  When he reached for her bowl, he saw her water had tipped over and was all over the floor.  She wouldn't come out of her kennel because she felt guilty for apparently stepping in her water dish in the night and dumping it over.﻿

I have other dog stories but I know most people are bored stiff with such things.  Sometimes the things Abby does touch me in their innocence.

And if I had a decent picture of The Darrel, I'd post it.  But for now, he seems to be the one taking all the pictures and is in so few of them I'm surprised as I look through my computer album.  I'll look through my thumb drive pictures and see what I can find.  And make a mental note to take more pictures of his sweet face.

My friend Arlene sent me a picture of The Darrel I'm going to add to my post here.  Isn't he cute?  Abby and her best friend Tara are not bad either.   He recently got rid of the beard thing.  I celebrated in the closet with my wine. 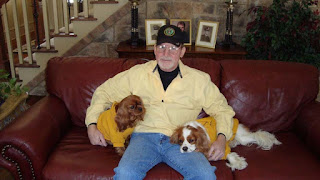 Did you ever go out of town for six months?  It's kind of like making a permanent move, and my hat's off to all of those people who travel constantly in motorhomes, in and out like troubadors.  I've been home meeting previous obligations but will join him by plane soon.   Where will he live?  Who does the banking back home?  Who takes care of the mail?  Who waters the plants?  Who maintains the house if "something" happens?  Who keeps the electronics working?  Who maintains the yard?  So many things can go wrong when one is not at home to monitor.  And how would I be with my husband over the holidays if nobody was there to take care of my mom, if my dog couldn't travel?

Well, I'm here to tell you, just like my book writing adventure...it takes a village.  A village of friends, family and encouraging people to facilitate something like this for us.  At first, I thought I'd just have to stay home, fly out for two days maybe, then back again.  But a veritible army of people have stepped forward for us.  It awes me that people are so selfless in this world where time has become a treasure.

It's purely spooky to be home alone.  Also tremendously freeing, I think.  Eat when you want, sleep when you want, think about me, me, me.  Looking down for a little brown person who isn't there--eek, where is she?   Nobody filling my gas tank but me.  Nobody else making coffee in the morning.  Nobody knowing what I'm going to say before I say it.  My right arm seems to be gone.  Weird.