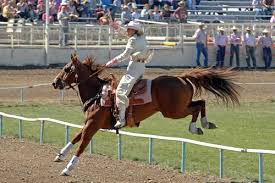 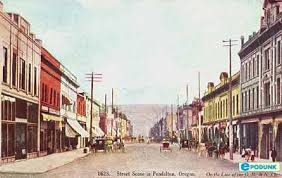 October 18
The Columbia River gorge's cliffs are lined with windmills as it turns out.  The night before, all we could see were the lights at each one--they stood out like stars so far overhead.  The gorge itself makes you feel like you're at the bottom of the Grand Canyon.  We found the windmills in daylight.  The river changes names as others merge with it.  We passed maybe four dams and locks, where ocean barges work their way inland against the current.  It's so amazing that the road we were on was cut through solid rock a couple hundred feet straight down, at the bottom of about 200' cliffs.  It feels like a huge wall.   At the top of Oregon, the river looks like an ocean and must be a mile wide.  It's all barren of trees and shrubs, with only a  little grass that shares space on the hills with windmills for another fifty miles or so.  A couple of green patches off on the Washington side must be watered from the river because they stand out like a couple of oases.  We think they're citrus orchards, but they were so far away we couldn't be sure, but there were jet engines planted we think to ward off frost.

We headed to Pendleton--the place where super well made wool clothing is made.  We hope to see a lot of woolens.  We next passed Arlington with its little marina full of sailboats.  We were in Umatilla County, which I suppose is a Nez Pearce name.  A friend, Jess Wright, had a horse named Umatilla in my past life when we rode with him in the 1970's.  Hmm.  Of course there is a railroad track running along side the freeway.  All the traincars have graffiti on them.  I guess nobody is exempt.  Right where the snake river comes in from the north the land has flattened to desert, again complete with sagebrush and tumbleweeds--also a bombing range.  Which is across the Columbia from Horse Heaven Hills.  Go figure.

Next we were in power line jungles.  I would think the dams we've seen could power the whole United States.  But it looks like a bad day in  El Paso, Texas, the ugliest town I have ever seen.
Scrubby trees suddenly appeared--and ah!  A reason for the smog--a huge chemical plant mixing in with the wires.  A good place to leave--ugh.

Suddenly desert forests of densely planted tree farm trees that looked about fifty feet tall appeared as farmed crops mixed with hundreds of acres of trees, onions, citrus, hay.  Monster commercial agriculture.  Pacific Albus Trees, a sign said.  Whatever that is.  This area look like Southern California rather than Western Oregon--arid but just enough rain to make parts of it green, with oleander bushes, bottlebrush, citrus trees and lots of decomposed granite.  The temperature was 47 degrees.

On the overpass railings/fences, are running horse sculptures.  I guess there are wild horse herds in this area.  The Umatilla Indian Reservation includes Pendleton.  Oregon soon looked like Iowa--farmland to all horizons.  Half of Pendleton is a prison.  Home of the Pendleton Roundup.  Home of Pendleton woolens.  So we stopped and bought a blanket at the factory.  It's a beautiful piece of work we intend to use for a bedspread at home.  Pendleton is a cute, old-fashioned 1950's style Western town.  It included the Wildhorse Umatilla Indian Casino.  Next we continued off the flat mesas into the Blue Mountain Umitalla National Forest--a bald forest that's east on I-84.  We saw the longest horsetrailer in the west, as well as a triple trailer longhauler, which we'd never seen before.  They kind of looked like trains.  Trees there are at about 4000 feet--which includes snow fencing.  The hills looked like gold cushions with pines, cattle, deer and antelope.  No higher mountains were around us, but chain signs were required and we saw the occasional Sno cat.  The temperature changed to 53 degrees.  Baker, Oregon, has a sign that says we were half way between the North Pole and the equator.  I've been wondering about that.  I-84 is a good place to be if you don't want any people. I have a hunch that area's weather is treacherous.