My blog: New Series: From Sea To Shining Sea Part 14 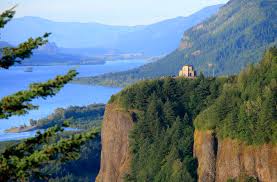 
Sunday, October 17
We arrived in Bandon last Tuesday, found Gary (the brother ) at the state park.  Gary already had a site for us and the weather was sunny at 73 degrees.  We walked a trail through underbrush to the Pacific Ocean and we were rewarded with a deserted beach cluttered with driftwood.  Abby was a happy dog tearing around like a coocoo.  Richard, our nephew and excellent artist, was there to paint which he'd been doing for two weeks. He intends to be a world class painter and I suspect he'll do it.  Gary and wife, Jean, took us sightseeing the next day.  Some amazing state parks with majestic ocean views, harbors coves and rivers.  But the temperature dropped and fog rolled in so it never got over 48 degrees for four day.  We were glad to head to warmer weather.  Their puppy, "Precious," was excited to see us and Abby, Precious's mother.  Precious has never met a stranger.  By Saturday she and Abby were doing the tandem run thing Cavaliers do with their playmates.  Also playing chase, they found a neighbor dachshund who participated with them.  Fun! for them and fun for us to watch the glee.

On our way out on Sunday, we decided to go ahead north as planned, even fearing more cold weather. We've never been on I-84 and thought it was about time.  The bleak desert didn't sound so good to us and we'd have to retrace through the whole state if we had gone south.  So we hit 5 North to Portland, Oregon. The Unipqua is a major river running all over the place.  More lumber mills were at Roseburg--I think we've seen five of them.  I'm not sure how forestry works but I suspect it's 100% controlled.  All of Oregon seems to belong to the government.  Everybody seems to work for the state.  I'm not sure how the state owns so much land.  Oregon is all about mountains and trees, good roads, tourist oriented, user friendly.  Fall is turning leaf many different colors, except for the pines of course.  Wildflowers are in bloom in little meadows between the tree clumps of Oaks, birch and cottonwoods, and we're weaving between the mountains and hillocks.  It's no wonder I've always been enamored of Georgia's forests.  The only forests I'd ever seen till I was 33 years old were California Pines and Oregon Pines.  It came to me how much we must be like Europe--their counties and our states so different one from the next.  We are totally impressed with the beautiful cities of Salem and Portland.  The freeways are showplaces--of course they are on Sundays.  Rivers make the Chattahoochee look tiny and the trees make us feel we're driving through a park.  It's all mowed and landscaped--green, lush and inspiring.  45 degrees and sunshine at 4:30 p.m.
We were stopped in a traffic jam due to a crash for about a half hour.  People all got out of their stopped cars.  A man saw Abby in our truck and asked if I had a leash he could borrow to walk his lab puppy.  I gave him one.  We were there long enough there was no problem with him returning it.  I expected someone to ask about our restroom on wheels (the Coyote) but nobody did.  Sunday was a slick day to get around Portland.  Traffic heave but flowing well.  Tons of state parks are on the map on 84 after the city.  We planned to use one with wifi for a change.
Mt. Hood peeks at us as we drive through/around Portland.  It's 11,239 feet--it looks like the perfect Littering fine--$6250.00. I think these people are serious greenies..$97.00 seat belt usage fine.  Hmmm.  Washington State was right over there on the next hills to our left.  The Hood River is as big as the Mississippi and navigable with a series of locks.  We're dwarfed by the massiveness.  We're in Lewis and Clark territory.  A canoe on that river which becomes the Columbia River, would look like a pebble on a beach.  Our road follows this river.   Perfect Christmas Trees are everywhere.