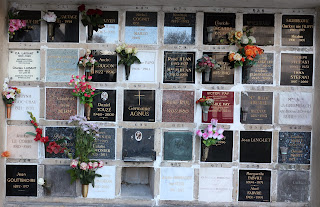 “I don’t think it’s supposed to be like that,” Jose told his crew chief.  The two men stared at the open door of the empty columbarium crypt. The vacant hole detracted from the stoic stack of burial crypts at .


Morning fog obliterated the world that lay beyond fifty feet.  Its soft insulation cocooned them against sounds of the Navy base activities two hundred feet below them in the harbor.


“Maybe Mr. MacDonald forgot to lock it,” Alejandro replied.  “Maybe it is a new tomb, with nobody in it yet.”


Alejandro reached into his jacket pocket for his cell phone, but remembered the cone of silence the military had placed over the peninsula. Electronics were blocked over the strategic military base grounds.   “I better go get Mr. MacDonald.”  He walked quickly toward his truck parked on the roadway of the cemetery, stepped up inside and started it.


Jose, an intent worker bee, picked up his shovel and carried it to the flower bed where a dead azalea plant crouched on the grassy floor.  A little breeze swept damp gray cotton up into his face.  He squinted.


Alejandro drove back a half mile through rows of headstones that followed the flow of land over the cliff to the on the west and over the bay into on the east.  The low-ceiling 1950’s style block building housing the office of the funeral director, Jerrold MacDonald, had just been painted the color of desert sand.


MacDonald, a military retiree with a full head of gray hair that matched his eyes double timed over to the columbarium wall clutching a printout listing the remains for that section of the huge wall.  With over a thousand deceased veteran graves spread over eighty acres, keeping track of where each of them lay was his responsibility.  Having one misplaced bordered on heresy and could mean the end of his tenure as director.


Alejandro returned with Harold Greevy, the beefy maintenance supervisor and both of them slid out of the truck.  “Did you look around the ground for an urn or a burial box?” Greevy asked. “We can check with the rest of the crew for why this door is open.  Maybe the door was damaged by a piece of equipment.”  His burr-cut hair contained drops of dew.  He carried an insulated Starbuck’s coffee cup he’d brought with him on the way into work.


MacDonald verified the crypt number with the sheet he held, then he examined the door.  He found no evidence of tampering or damage.  His heart beats pushed his blood pressure up to 180.


“It wasn’t like that when we got here at ,” Alejandro said, with tears in his eyes.  The enormity of the situation overwhelmed him.  “Jose would have told me if he’d seen it earlier.”


Jose leaned on his shovel handle as the two other men arrived. He’d finished removing the azalea plant and replaced it with a one-galleon hibiscus.  He suspected a vole had eaten the azalea roots and killed the plant. But he was not an agronomist.  “That is true.  It was not open earlier.”  He’d been born across the border in , fifteen miles southeast and had never been further north than .  Small boned, he stood inches shorter than any man there and weighed 130 pounds.  He could lift and carry pound sacks of mulch, and he knew he could shovel for three days straight because he’d filled sandbags that long when rain had fallen on his town in during a hurricane ten years ago.


“Drive down toward the lighthouse and find the irrigation crew,” Greevy said to Alejandro.  “Ask if anybody knows why this door is open.”  He didn’t add to ask them where the remains had gone.  “I’ll go to the commitment shelter and find Mitchie’s crew.  They’re working on tree limbs in that section.  How far did the mowers get this morning?”  He couldn’t hear mowers over the entire two miles from the gate to the lighthouse.


Nobody knew where the mowers were.  Greevy took off at a run, tossing his coffee cup into the trash can near the vase watering station nearby.  He found his electric cart at the maintenance shed and drove it to the commitment shelter.


The commitment shelter loomed like a ghost ship lost in a fog storm as Greevy approached carefully.  He wanted to find the crewmen, not run them down in his haste.


He would not call out to find them, however.  Disrespect of the hallowed location was inconceivable, unacceptable.


To his surprise, a lone woman sat on a stone bench of the shelter.   She appeared to be meditating, so Greevy quietly stopped his cart at a respectful distance and walked behind the shelter out to the lawn area beyond it to find crew members.  A stack of seat cushions placed on the ground in their storage containers lay behind the wall.  Funerals would begin at and continue every half hour until this evening.  The woman perhaps wanted to spend a little time alone before the first service began.


He found no crew members in the area.  There had to be some explanation for how a crypt came to be open with its urn box missing, and he would get to the bottom of it.  He turned back to his cart to continue his search for someone to help him.


Greevy saw Jerrold MacDonald arrive at his office on his way out the winding road.  MacDonald had an asphalt parking pad squeezed in between the building and a grass strip.  Greevy stopped to tell the Funeral Director about the missing urn.


Jerrold MacDonald returned to his office to use the telephone that the Navy allowed for the cemetery director.  But who should he call?  The heresy of a missing urn made his hands shake.  His mind tried to grasp all of the ramifications. The Veteran’s Administration would surely shut down the cemetery and disallow visitors.  The Navy would not be capable of appeasing the protest groups that would justifiably arrive.  All the employees would be suspect, grilled, fired, stigmatized.  Those with GS ratings would be demoted, transferred.  The news media would point and accuse and hunt for a head to stake on the perimeter.  MacDonald’s arm ached, his heart pounded.


“What in the world happened?” Cherrie, the office secretary said when MacDonald entered.  “You look like you’ve seen a ghost!  Come here and sit down, sir.


Shall I call your wife?”


Cherrie had no husband and four children at home.  She’d pretty much seen everything of an emergency nature.  Not much could be worse than all kids down with Chicken Pox at the same time.  She wanted to prod Jerrold for a reason he was upset, but he’d tell her before long anyway.


“No, no.  Please God, don’t call anybody.  He fished in the pocket of his slacks for a Tums.  We need time.”  He walked to his beat up 1930’s vintage military issue desk with its broken left drawer, picked up the phone and dialed the front gate.  “Please stop all cars going off the grounds of .”


Cherrie looked up from her desk, concern blooming.


“Ideally, yes.  Close the gate until I call you,” MacDonald told him.


Two hours till the first funeral.  Whoever had removed the urn had to be nearby.  He rethought the woman at the commitment shelter.  He’d have to drive back over there since his heart was acting up.  The last thing Jerrold needed was another heart episode.


Vincent slowly sawed a tree limb.  It had taken him twenty minutes to find the damaged oak in the fog, even when he knew exactly where it was.  A chain saw would make his job much faster, but noise was not acceptable unless absolutely necessary.  He’d arrived at work at this morning and Alejandro sent him to cut the tree limb.  He didn’t like not being able to see around him.  He’d been lost as a child in the Sonoran desert once when his mother’s car broke down.  They’d walked for miles before sun set then coyotes took up howling.  He couldn’t see the dogs but they could see him and his mother as they plodded down the deserted roadway.  Even pressed in his mother’s arms, he thought he could feel their teeth cut through his arms and legs to his bones.  He shut out the bowl of gray soup and set his mind on his job.


In two hours her life would change.


Harold Greevy slammed the door to the Cemetery office as he hurried inside and looked around for Jerrold.  “Where’s the boss?”  The maintenance supervisor was dressed in a golf shirt he’d apparently slept in and the same dark khaki pants and boots he wore every day.


Cherrie turned to him in her gray slacks and white blouse with little pink flowers dotted on it.  Her youngest daughter learned her numbers by sitting on Cherrie’s lap and counting the blossoms on that blouse.  “He’s still looking for Mitchie’s crew, I think.  What in the world has happened?”


Harold scanned the small room as if anybody could be standing where he could not see them, and lowered his voice.  “An urn box is missing from the columbarium.  The door was standing open.”


A violent oven seemed to ignite in her chest.  “But how can that be?  It’s a mistake.”  Her eyes welled up and tears ran down her cheeks so quickly she didn’t know it was happening till drops fell on the papers she was holding.


He walked around the desk and held her close.  “We’ll find it.  You’re right, this is a mistake.  I’ll go check it again.”


Cherrie hadn’t been held like that since her brother had done the same thing at their father’s funeral.  She was surprised it meant so much and wanted to stand there wrapped in Harold’s arms for as long as possible.  As it was, he appeared to not be anxious to turn loose of her either.  They’d worked at the cemetery for four years together and had never touched.  Now she didn’t understand how that could have happened, along with confusion about how an urn box could go missing.  Her head spun and life as she knew it no longer made sense.  Even her desk looked odd from Harold’s shoulder.


The last Cherrie had heard, Harold was seeing somebody.  But that was how many months ago?  The professional part of her made her pull back from his arms.  Her father, now buried outside in the green carpet of conventional plots, had been a lifer in the Marines.  Cherrie understood protocol.  And standing in the middle of her office in Harold’s arms was not protocol.


Harold’s face turned red right up including his ears.   He asked Cherrie to let Jerrold know he would check all of the columbarium walls in person.  In fact, he would test each door to see if any were open, though that had never happened in the years he’d been associated with the cemetery.  He hurried back out to his four wheeler and started toward the southeastern columbarium.
Posted by Melody Scott at 11:17 AM